Challah for Hunger is an international nonprofit organization that brings people together to bake and sell challah to raise money and awareness for social justice causes. Most CfH chapters operate weekly, baking and selling 30 to 300 loaves of challah, the traditional Jewish egg bread. Each chapter donates 50% of its profits to the organization’s national cause, MAZON: A Jewish Response to Hunger, and 50% supports local organizations.

UVA is lucky to have a CfH chapter operating out of the university’s Brody Jewish Center. SAL members who participated in the activity remarked that every week they pass the CfH table on campus that sells challah but never knew how the bread was made. Chapter President Ciceli Bradshaw reported that, during the afternoon activity, “the challah smelled so delicious while we were mixing it, that we just wanted to eat it all! We mixed and kneaded the bread and left it to rise over night. The task allowed us to see exactly what goes into making the delicious challah!”

The activity was also an opportunity to bond with members of another organization at UVA and support them in their endeavors towards a great cause. Ciceli also added, “It was a ton of fun and I would love to do it again or possibly even come back on the second day and help bake the challah. This activity was great and everyone had fun!”

For more information on the University of Virginia Chapter, click here! 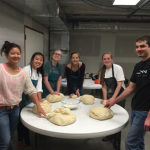 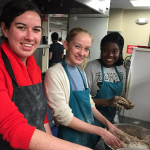