The Indiana University of Pennsylvania Chapter came together to raise money for the Lazarus Effect while playing a fun game.  Members and their friends formed teams for a campus-wide game of Capture the Flag.  Four teams competed to win a prize. One team hid their flag somewhere on campus and the object of the game was for another team to find and capture that flag, bringing it back to the safe area.

The teams had a great time getting to know each other better while playing the game.  In the end, team Gucci was the winner and received a $25 gift card to Cici’s.  This activity was not only a time to get together and have fun, but was also a way to raise money for a good cause.  A small entry fee was charged to play and the funds raised will be given to the Lazarus Effect.

To learn more about the Lazarus Effect, click here.

For more information on the Indiana University of Pennsylvania Chapter, click here. 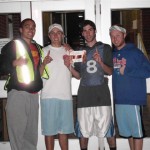 Card-Making for a Cause